Menu
What constitutes a datacentre is becoming an increasingly complex question to answer as the variety of deployment types and use cases continues to grow, data from Vertiv suggests.In an update to a piece of research that the datacentre power equipment supplier conducted five years ago, it polled 800 professionals employed in this field and found a huge variation in the types of facility they work in today compared with the previous survey.

The initial survey quizzed datacentre workers on how they thought the datacentre industry would change in the decade up to 2025 from a market forces and technology perspective.

The updated report aims to see how close to reality some of these predictions are proving so far, while shining a light on some of the emerging and previously unforeseen trends that are affecting the datacentre industry in 2019.

Chief among the changes is the growing variety of facilities that respondents may find themselves working in during 2019 compared with five years ago.

“Today, when we say datacentre, it is necessary to specify exactly what type of facility we are talking about,” says the report.

“Is it the high-performance computing facility with rack densities approaching 50kW? The hybrid enterprise datacentre that is increasingly managing resources across cloud, colocation and multiple distributed sites? Or is it those distributed sites themselves, which are becoming more critical as service and applications move closer to users?”

Just under half of respondents (48%) said they worked in “on-premise, core enterprise/private cloud environments”, while a further 20% said they were employed in managed or colocation facilities.

All of these environments are considered datacentres, and while there are some similarities in the types of equipment these sites are kitted out with, the physical characteristics of these sites are all very different, says the report.

“While technologies such as servers, infrastructure systems and management tools have advanced somewhat predictably, the nature of what constitutes a datacentre has changed dramatically,” it adds.

And while the variety of facilities that fall under the datacentre banner has increased, as time goes by, they are expected to be increasingly interdependent and function together to ensure that end-users’ increasingly high performance and availability demands around digital services are met.

Since the last survey was conducted, the datacentre industry has experienced huge growth, fuelled in no small part by growing enterprise demand for cloud services, and the growing creep of digitisation within society at large.

As a result, the amount of power the sector consumes has increased steadily, and respondents to the 2019 report have lower expectations than the original participants about how big a role some types of renewables will play in the energy mix used to keep their facilities up and running.

“Compared to 2014, participants projected a lower percentage of total datacentre energy to come from solar, natural gas, nuclear and wind,” says the report.

For example, in the 2014 survey, respondents predicted that 22% of datacentre energy would come from solar sources and 12% from wind farms by 2025, which the 2019 report authors describe as “unrealistic”.

The 2019 respondents predicted that 13% of datacentre power will come from solar sources by 2025, and 8% generated by wind farms – targets that the authors claim the industry is still unlikely to hit.

“This year’s numbers for solar and wind seem more realistic, although still ambitious,” says the report. “We are likely not close to advancing at a pace that would put us on course to meet even those reduced projections, although precise numbers on the use of renewable energy in datacentres are hard to find.

“While solar and wind technologies continue to advance in terms of capacity and cost competitiveness, distribution and reliability challenges have limited their application in the datacentre.”

At the same time, however, respondents’ expectations about how widely used hydroelectricity will become within the datacentre industry are extremely optimistic, with participants tipping the technology to become the largest energy source for the industry by 2025.

Elsewhere in the report, respondents shared their thoughts on how the datacentre industry’s ability to attract and retain staff in the coming years is likely to fare, given that the 2014 report suggested the sector was at significant risk of a “brain drain”.

In the updated report, 70% of respondents said they expected to be still working in the industry by 2025, and 16% expected to have retired by then.

While the numbers are better this time around, the report authors caution against gleaning too much positivity from them, given that there is shorter period of time between now and 2025 compared with when the original research took place.

“With the labour market already tight in some key markets, the potential to lose 16% of the workforce to retirement could impede the ability of organisations to adapt to changing requirements,” says the report.

“On the other hand, it is also driving more operators to normalised designs and the application of rapid deployment configurations that require less intellectual capital to deploy and support.”

For your chance to meet Vertiv at DataCentres Ireland register online today at https://www.datacentres-ireland.com/registration/ 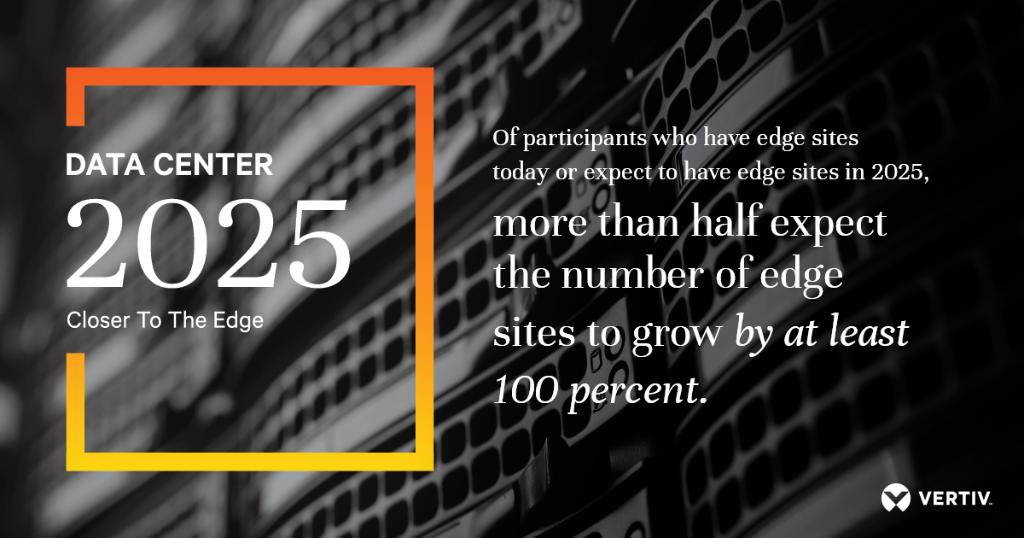