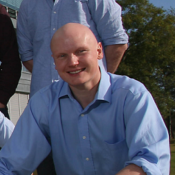 Prior to his current position, he worked as a Post-Doctoral Researcher in the Combustion Chemistry Centre (C3) at NUIG between January 2010 and December 2011. His work with Dr. Henry Curran at C3 was on studying efficient and environmentally-benign combustion of existing and next-generation fuels, including natural gas and biofuels.

He received Masters and PhD degrees in Mechanical Engineering from the Massachusetts Institute of Technology (MIT) in 2005 and 2010, respectively. His PhD research involved the development of a computer-based simulator for the operation of commercial gasifiers used in advanced near-zero CO2 emissions coal-fired power plants. In 2002, he graduated with a BE degree in Mechanical Engineering from NUIG.

Rory has also worked as a part-time Energy Consultant for the Sustainable Energy Authority of Ireland (SEAI) and Enventix Inc., a Silicon Valley-based clean tech start-up, and as a Contract Researcher in 2002-2003 for NUIG and Proxy Biomedical Ltd., an Irish medical device company. He enjoys organising proactive initiatives with students from all backgrounds with interests in energy; serving as Content Director for the 2009 MIT Energy Conference, and Founder-President of the NUIG Energy Society and NUIG Energy Night in 2010.