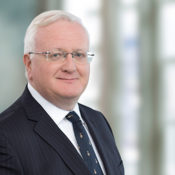 Dr Vincent Power is a Partner specialising in EU law, EU and Irish competition/antitrust law, merger control, regulatory law and transport law for national and international as well as public and private clients.

He is Head of the Firm’s EU, Competition & Procurement Group which is consistently ranked at the forefront of Irish law firms and he is seen as the most experienced competition lawyer practising in Ireland.

In 2017, he won the ILO Client Choice Award for the category of “EU Competition and Antitrust” across the entire 28 Member State European Union and in 2018, he won the same award for Ireland – these awards are made by The International Law Office in recognition of a partner who excels across the full spectrum of client service. In 2019, he was elected Chairman of the European Maritime Law Organisation. He is listed in the Lloyd’s List Top 10 Maritime Lawyers 2019 worldwide.

Vincent has advised on most of the leading competition, merger control, EU law, cartel, abuse of dominance, State aid, joint venture, pricing, refusal to supply, competition investigations, dawn raids, Competition Authority / CCPC and competition litigation cases in Ireland over the last 20 years. He has been involved in several hundred merger filings in Ireland and the EU and has experience and expertise in all of the issues involved. He has developed a particular expertise in regard to Brexit Law.